An Analytic Dictionary of English Etymology

The academic-sounding title of this work is a fair warning of its contents. If terms like Neogrammarian linguistics, phonosemantics, secondary ablaut or cognate cause you to blench, or if you’re unfamiliar with the fundamentals of etymology and the history of English and related European languages, you should give it a miss. Furthermore, it isn’t a full dictionary but a sampler of things to come.

Its author, Professor Anatoly Liberman has been working on his dictionary of etymology since 1988. A vast bibliography has been assembled from the literature of linguistics and each entry is the result of detailed analysis. He wrote a general introduction to the subject in 2005, Word Origins and How We Know Them. This volume is a showcase sample of fifty-five entries that will form part of the final work, to test his chosen approach and to get feedback.

The entries are all words that are found intractable by current dictionaries. These aren’t obscure or rare but among the most basic words in the language, including boy (and girl), bird, Cockney, dwarf, fiddle, ivy, kick, lad (and lass), man, rabbit, understand, witch and yet. Do not expect firm conclusions in every instance: these words are poorly understood for good reasons. 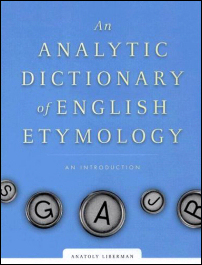 Professor Liberman believes that readers seriously interested in the history of words are ill-served by the current dictionaries of etymology. Etymologies are too brief, he feels, over-condensed to the point of being misleading and often over-technical; they fail to get across the wealth of research and disputation that surrounds many words or the sources of their information, and as a result appear to be shallow, obscure, dogmatic or unhelpful. He is particularly critical of comments such as “unknown origin”, arguing that what’s often meant is that there’s disagreement about origins, not ignorance, an interesting philosophical distinction. He feels that discussion should be the prime goal of an etymological dictionary.

Many of his discussions here are extremely detailed. Take Cockney as an example, best known as the name of a Londoner traditionally born within the sound of Bow Bells. Where it comes from has long been disputed. Professor Liberman writes more than six pages on it, about 5000 words, detailing the evidence and the various theories that have been put forward (that’s far from the longest entry: the one on dwarf is more than 16 pages). Many dictionaries argue that it comes from the old expression cock’s egg, for a misshapen or small egg, and that this was later applied to an urban dweller. He concludes this is incorrect and that in Middle English there were two words spelled cokeney, one meaning a cock’s egg, the other a pet child, simpleton, later a pampered, effeminate, or squeamish person, hence the inhabitant of a town. This is now accepted as correct in some recent dictionaries, such as the single-volume Oxford Dictionary of English.

A second example is the entry on girl, long a puzzle, not least because it could at first refer to a child of either sex (in some English dialects the reverse is true, with child meaning a girl). One view is that girl derives from Old English gyrela, garment, with the sense then shifting from “clothes” to “wearer of clothes” (the modern slang skirt for a woman is a parallel case). Others argue for a link with Low German Gör(e), a small child, though problems exist with dating (girl is recorded first by a couple of centuries) and how the vowel sound could shift. Professor Liberman notes instead the correspondences in sound in a loosely related group of continental Germanic languages — starting with g or k and ending in r(l) (the l being a diminutive form) — that relate to children, young animals and creatures considered to be immature, worthless or past their prime (such as kerl, an Old Irish term for an old woman and gorre, Norwegian dialect for a little boy or lazy person, as well as Gör(e)). He suggests that an unrecorded word from this group was borrowed into Middle English. Some experts regard sound analogies as inadequate evidence, in part because of the difficulty of being sure that the symbolic meanings ascribed to them actually existed in the various languages of the period.

Professor Liberman’s main aim is to make the literature on English etymology available and to sweep away the anonymity that surrounds the conclusions presented in etymological works. In this he is not alone; the recently revised entry for girl in the online Oxford English Dictionary, for example, gives a good account of the main competing theories and provides detailed references for further research, including links to his own work.

It may transpire that the greatest service he has provided to the history of English language is the extensive, indeed unparalleled, bibliography he has brought together.