Word Origins and How We Know Them

When a man has spent the past 17 years working on a dictionary of etymology, with no end in sight, the one failing that you cannot tax him with is lack of patience. That he should find enough time to stand back from his labours — and his full-time academic duties — and write an overview of the whole subject for non-specialists is very welcome, particularly when he manages to inject gentle humour into what can be an excessively dry subject. 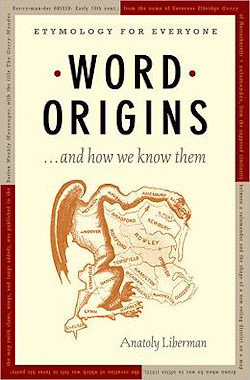 Professor Anatoly Liberman has avoided this pitfall by dividing his subject into 18 themed chapters on various aspects of the study of the history of our language. The style of the book is deliberately old-fashioned in one respect (reflected in the cover design, which features a map of the original gerrymandered voting district), with each chapter headed by a contents list and an introduction like one in an eighteenth-century novel (“Chapter One, in which the author introduces himself, assumes a confidential tone, and suggests that etymology and entomology are different sciences”). If you find these affected or cutesy, they are easily passed over in favour of the meat below, which is straightforwardly written.

The first part of his work was to compile a vast bibliography of pretty much everything that’s been written over the past 500 years in some 25 languages about the origins, or the supposed origins, of English words. As a result, he often has a different take on sources to those in the standard works. This makes his dictionary something to look forward to. The bibliography, in two volumes, plus a sample volume containing 50 entries, are to appear in 2006; the full work will come out in parts every couple of years thereafter (let’s call them fascicles, as the Oxford English Dictionary’s editors did a century ago).

As an example of his take on words, the OED considered the final part of ragamuffin to be fanciful, but he points out that in a Cumberland dialect Auld Muffy is a name for the Devil, related to French maufé, ugly or ill-featured, and that rag also refers to the Devil (from the medieval Ragman). So ragamuffin may well have been the tautological “devil-devil”, only later changed in sense under the influence of that initial rag to mean a tattered street urchin. He is also doubtful of the conventional view that the first element of the American kitty-cornered or cater-cornered (meaning diagonally opposite) is from French quatre, a square (“it has little to recommend it”), arguing that its true origin is in a word like Danish kejte (left hand) or kejtet (clumsy), left-handers often being considered such. The book has other such revisionist views, all argued in detail.

Chapters cover such subjects as the way words are formed, such as words formed by reduplication (shilly-shally, hubbub), words created by pasting a word or part of a word inside another word (infixation), those made by adding prefixes and suffixes, words that have been created from names, coinages by known individuals, and words that have been borrowed from other languages. The book ends with a brief survey of the current state of English etymology.

A sub-title of the book is “Etymology for Everyone”, which is true for a special case of “everyone”: those seriously interested in the origins of our language, who actively want to find out more about the way etymologists work, and who along the way don’t mind taking in some sobering guidance on the pitfalls of ferreting out word histories. It will repay careful reading, but the casual browser may find it hard work.