You’ve probably seen one of these being trundled along the road by a surveyor, though it’s unlikely that either he or you will call it a waywiser. It consists of a wheel at the end of a handle, with a counter to measure the number of turns the wheel makes. It’s a quick way of measuring a distance and has been known in various forms since antiquity — the Roman architect and military engineer Vitruvius described one in detail in the first century BCE. 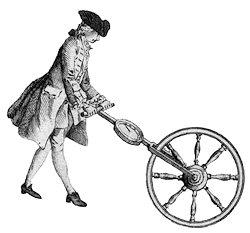 An eighteenth-century perambulator
with a waywiser

To name it, British surveyors of the seventeenth century borrowed a German word, Wegweiser, meaning literally something that shows the way, a signpost, but changed its sense. Waywiser was also given to what we now call a pedometer, which measures distances by counting the number of steps a person takes. The famous scientist Robert Hooke invented yet a third device with the name:

It was one part of a way-wiser for the sea; the whole engine being designed to keep a true account, not only of the length of the run of the ship through the water, but the true rumb or leeward way, together with all the jackings and workings of the ship.

Today the road version is usually given the trivially accurate name of surveyor’s wheel. It has had others — clickwheel, trundle wheel, cyclometer (on a bike) and odometer (sometimes hodometer) — though this last one turns up today more often for the closely related device in your car that indicates how far you’ve driven.

In earlier times there was yet another name for it: perambulator. This has only a limited connection with the carriage for conveying babies. The waywiser sense derives from the old meaning of perambulator for somebody who walks about for leisure. In the seventeenth century a perambulator was a person who carried out a formal circuit on foot to record the boundaries of an area (a perambulation), hence a type of surveyor. The term later shifted from the person to the measuring device or pedometer he used.