I caught myself using the obsolete word withal in an e-mail to a subscriber and out of interest looked it up. I was deeply chastened to find it dismissed as a Wardour Street word in every edition of Fowler’s Modern English Usage back to the first of 1926. It is not a compliment. 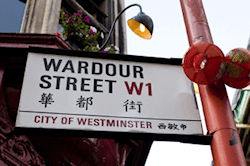 In my younger days, London’s Wardour Street was a metaphor for the British film industry, which was based in and around it. No longer. As the Sunday Times wrote in May 2012, “The movie companies, which had great window displays all along Wardour Street, have gone.” To men of an earlier generation, such as H W Fowler, the associations of the street were instead with dealers in antique furniture and imitations thereof.

“Thereof”? Henry Fowler wouldn’t have approved of my using that either; he included it alongside withal in his collection of Wardour Street words, with wot, thither, varlet, howbeit, belike, albeit, betimes and numerous others. He wrote of them in sarcasm of deepest hue:

As Wardour Street itself offers to those who live in modern houses the opportunity of picking up an antique or two that will be conspicuous for good or ill among their surroundings, so this article offers to those who write modern English a selection of oddments calculated to establish (in the eyes of some readers) their claim to be persons of taste & writers of beautiful English.

A Dictionary of Modern English Usage, by H W Fowler, 1926.

Wardour Street words are borrowed especially by the authors of bad historical fiction who adopt the “Prithee, sirrah!” and “Have at ye, thou scurvy varlet!” schools of exposition. They follow writers of an earlier age, above whom towers Sir Walter Scott, who single-handedly invented the historical genre and resurrected many antique words with which to decorate it.

Wardour Street English sounds like a phrase that Fowler might have invented. But it’s older. Its creator, writing in Longman’s Magazine in October 1888, was a historian named Archibald Ballantyne, who had the year previously published a biography of the eighteenth-century statesman Lord Carteret.

He was ridiculing attempts by a group that included the Dorset poet William Barnes to expunge foreign elements from the language. Their ideal was to return to the “purity” of pre-Conquest “Anglo-Saxon” English through inventing replacement terms on Old English roots, such as fireghost for electricity, gleecraft for music or high-deedy for magnificent. Ballantyne also mocked William Morris, in particular his translation of the Odyssey, full of terms such as thrall-folk, dight and yeasay. He wrote of it, “This is not literary English of any date; this is Wardour-Street Early English — a perfectly modern article with a sham appearance of the real antique about it.”

In the same way that an unscrupulous dealer might distress a modern piece of furniture to create a spurious impression of age, argued Ballantyne, so writers who clothe their prose in the cast-offs of ye olde Englyshe are producing poor fakes. Elderly lexicographers who spend so much of their time reading old texts that they have picked up obsolete turns of phrase may surely be excused this condemnation.

The term is less used than it once was but may still be found:

Massie then settles down into a species of Wardour Street English not seen since the days of W.H. Ainsworth and G. P. R. James, in which a horse is always a trusty steed or even a “palfrey”, the wretched Alory, absconding bearer of the Oriflamme, is branded ‘a coward and a poltroon’ and Elgebast warns the esquires Ivor and Yves that “if you play me false I shall split the pair of you from gizzard to guts”.

In a review of Charlemagne and Roland by Allan Massie in the Spectator, 11 Aug. 2007.