Reader David Hutchinson asked me about this word, which he had encountered in a well-known story by H P Lovecraft, The Call of Cthulhu, which appeared in Weird Tales in February 1928: “After vigintillions of years great Cthulhu was loose again, and ravening for delight.” Was this perhaps a creation by Lovecraft or a real word with some history?

It’s rather rare but vigintillion is real enough, though its meaning has been disputed. Some old references explain it as 1 followed by 120 zeros (10120) but modern ones as 1 followed by a mere 63 zeros (1063). This gross disparity in definition of a number that by any measure is awesomely huge (the universe is estimated to contain about 1023 stars) is the result of different French and English methods of naming big numbers. 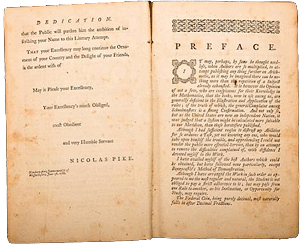 When Lovecraft was writing a century ago, the word was known to many Americans from the rote learning of arithmetic in school. This Gradgrindian approach to imparting facts was based on works such as A New and Complete System of Arithmetick: Composed for the Use of the Citizens of the United States, written by Nicolas Pike in 1788 but later revised and extended by others. Most children would have met one of the abridged versions considered to be more appropriate for tender minds. It was one of Pike’s revisers, Chester Dewey, who introduced vigintillion, in the fourth edition of 1822:

Pike had sensibly ended his list at duodecillions and to extend it was surely otiose. Successors and imitators perpetuated Dewey’s version of this utterly useless catalogue, few of whose members have ever been encountered in print other than as part of this list.

Most enforced learners must have forgotten almost all of these number words immediately after leaving school and probably felt the better for it. Some later recalled its final member, not in its specific sense but as a way to express some very large but unspecified number, much as we use words like gazillion or bazillion today:

Well when a boy we learned the numeration table as far as vigintillions by the English method, and it is well we did, for nothing short of this would tell of the corn crop this fall.

The names never stood much chance of being adopted. When the need to refer to large numbers became urgent a century later, a set of prefixes were created (giga , tera-, peta-, exa-, zeta-, yotta-) that take us to 1024, about as far as most people will ever need to go. They mostly appear in computing (gigabytes and terabytes and the like) since recorders even of national expenditure haven’t yet needed to speak of sums of money much greater than a trillion. Douglas Hofstadter wrote wittily in his Metamagical Themas column in Scientific American in May 1982 about these old terms:

To be sure, there are some official names for bigger numbers [than trillions], but they are about as familiar as the names of extinct dinosaurs: quadrillion, octillion, vigintillion, brontosillion, triceratillion and so on. We are simply not familiar with them, since they died off a dinosillion years ago.

Let that be their epitaph.