Friday 15 April 2005 marked the 250th anniversary of the publication of Dr Johnson’s Dictionary of the English Language. Scholars today continue to regard it as a landmark in the study of the language, an extraordinary achievement by one man, who was fighting against indifference and poverty.

Well into the following century, to speak of “the dictionary” was to refer to Johnson’s work. It was the first to systematically illustrate words through citations; as the title page said, terms were “illustrated in their different significations by examples from the best authors”. But modern critics will also point to its relatively small size, to an idiosyncratic choice of headwords, and to definitions marred by prejudice and caprice. 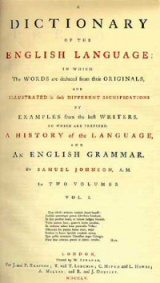 Among these are the famous examples quoted whenever the Good Doctor’s dictionary is mentioned: “excise: a hateful tax levied upon commodities”, “distiller: One who makes and sells pernicious and inflammatory spirits” and “oats: a grain which in England is generally given to horses, but in Scotland supports the people”. And every modern successor can recite: “lexicographer: A maker of dictionaries, a harmless drudge.”

Some of his definitions must have taxed the vocabularies of even the most literate of readers. “network: Any thing reticulated, or decussated, at equal distances, with interstices between the intersections.” To define a network as reticulated would cause indrawn breath among modern lexicographers, since it meant something “constructed or arranged like a net”, so his definition was circular; decussate meant to cross or intersect so as to form an X shape; nowadays it’s mainly a technical term in botany for leaves arranged in pairs each at right angles to the next pair above or below.

Another definition of like kind was “cough: A convulsion of the lungs, vellicated by some sharp serosity.” Few of us will know serosity, an old term for serum or the watery humours in the body. Even fewer will know the verb vellicate, meaning to irritate, though it was employed in Dr Johnson’s time as a medical term for some substance or medicament that had a sharp or acrid effect, or anything that nipped or pinched the body (its origin is the Latin vellere, to pull, pluck, or twitch). Edmund Burke used it a couple of years after the publication of the dictionary in a work entitled A Philosophical Inquiry Into the Origin of our Ideas of the Sublime and Beautiful: “There can be no doubt that bodies which are rough and angular, rouse and vellicate the organs of feeling, causing a sense of pain, which consists in the violent tension or contraction of the muscular fibres.”