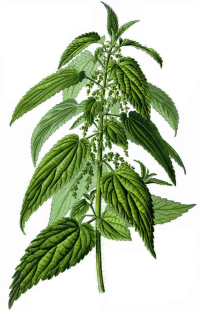 Have you urticated yourself today? People have been doing it for a couple of thousand years to relieve arthritis pain, hives, rashes and even sciatica. To perform urtication, all you need is a nettle plant and a glove. Put on the glove, pick up the plant, and smack yourself repeatedly. ... Urtication is not recommended.

The Green Pharmacy Herbal Handbook, by James A Duke, 2000.

The word can be traced back to Roman times. Latin urtica is the stinging-nettle, a name in turn taken from the verb urere, to burn. The medical term urticaria refers to a condition of the skin that’s also called nettle rash and hives.

Romans are said to have performed the nettle-flogging technique with other aims in mind than easing arthritis:

Dreading the English climate, [Romans] brought nettles to plant around their first camp in Kent, intending to use them as food, animal fodder and, more bizarrely, as a quick heating system. A flogging with nettle stems was, they had discovered, just the thing for warming chilly limbs. Enthusiasts might like to know that it’s called urtication.