This turned up in an online BBC story discussing the reasons for unipedal resting in flamingoes. Yes, it means standing on one leg. It isn’t in any of the dictionaries I’ve consulted but it’s clear from the evidence that it is a serious, if jargonistic, term of biologists and doctors, and is fairly common. For example, the unipedal test, in which a person is asked to try to stand on one leg for a few seconds, assesses how well elderly or infirm people can balance and their risk of accidental falls. 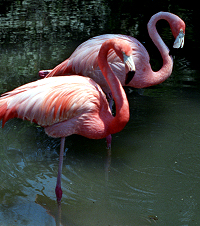 My earliest example, a joke, appeared in the 1829 book Constantinople in 1828 by Charles MacFarlane. He wrote about the way in which women sat in Smyrna: “The ‘received position,’ even in company, is to sit with one leg on the sofa bent under them, and the other hanging over the edge.” A visiting Frenchman, “who saw, for the first time in his life, this unipedal exhibition” of a seated row of women, asked if all the women in the city had but the one leg.

A later appearance sounds funny but probably wasn't intended to be:

The Era, 11 Nov. 1877. This was a weekly newspaper about the theatre, actors and music hall. The advertisement was seeking engagements.

Another example is in Principles of Abnormal Psychology by Edmund Conklin of 1928, in which he refers not only to unipedal and bipedal foot actions but also wrote, “The last two actions involved the use of the hands in both unimanual and bimanual activities.” He could have written that the individuals sometimes used one hand and sometimes both, but this presumably wouldn’t have been scholarly enough.