The Fifth of November in Britain is a traditional festival marked by bonfires and fireworks. It commemorates the day in 1605 when a group of conspirators, including the infamous Guy Fawkes (in truth a minor member of the plot), failed to blow up the Houses of Parliament and with it King James I of England. It’s celebrated privately less than it used to be because of the high cost and perceived danger of fireworks, but public events remain common.

Tourbillion (in older works more commonly tourbillon) is one of the many types of firework that might be part of the festivities. It was described by Charles Dickens:

A Tourbillon is a sort of double rocket, having orifices so placed as to produce a double recoil — one rotatory and one vertical — the Tourbillon revolves and ascends at the same time, and is an exceedingly beautiful and brilliant firework.

Household Words, 10 Sep. 1853. Putting it another way, it produces a vertical spiral of flame and sparks.

Many famous pyrotechnic displays have included them, such as the extraordinarily lavish and over-hyped one in April 1749 that was accompanied by the first public performance of Handel’s Music for the Royal Fireworks: 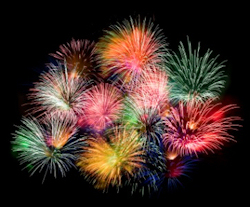 Like many other firework names, tourbillion is from French. The French influence derives from an early work on the ceremonial and recreational uses of fireworks published by the military engineer Amédée-François Frézier in 1706. Tourbillion is from tourbillon, a tornado or whirlwind, which can be traced back to Latin turbo, something that revolves or spins, such as a top, a whirlpool or eddy, or a tornado. Tourbillion in English has had the last two of these senses and is also known to watchmakers as a rotating cage that’s designed to offset the movements of the wearer.

Other firework names from French include crossette (little cross), which breaks into pieces to make a cross shape; gerbe (a sheaf of wheat), which throws up a fan of coloured sparks or flames; maroon (marron, a chestnut), which makes a loud bang like a cannon (it’s said to derive from the noise of a chestnut bursting in the fire); nautic (nautique, nautical), a firework that floats on water. A pot de brin was described by Charles Dickens in the same article in Household Words as “a case or cavity from which serpents, stars, and crackers are thrown up into the air”.