Americans, for whom marbles has been an organised competitive sport for a century, may gently disparage the title of the World Marbles Championships, held in Tinsley Green in West Sussex each Good Friday (but then, let’s not mention baseball’s World Series which, despite persuasive urban legend, has nothing to do with the New York World newspaper). The organisers of the World Marbles Championships claim, though, that the game has been played in Tinsley Green since 1588, which — if true — gives them an unimpeachable claim to seniority, if not global dominion. 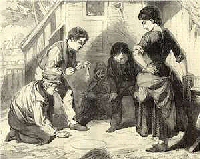 In this form of the game, play is confined to a six-foot-diameter circle in which 49 marbles are placed. Players, in teams of six, compete to knock the marbles out of the ring by flicking their shooters or tolleys at them with their thumbs. Each success gains one point and the first team to reach 25 points wins.

Some marbles terms are quite ancient, especially knuckle down, meaning to place one’s knuckles on the ground preparatory to flicking the tolley, which is recorded from 1740; this may be the same phrase as knuckling down or knuckling under for submitting or giving in, and to knuckle down, to apply oneself seriously to some task. Less well recorded is cabbaging: shooting your tolley from a spot closer to the target marbles than the rules allow; this seems to be Tinsley Green jargon, as is nose drop, their version of the coin toss, in which players drop their tolleys from their nose to a line in the sand. The player whose tolley lands nearest the line goes first.

This word tolley for the shooting marble is surprisingly recent, at least in the written word. It suddenly appears in news reports in Britain and America in 1970 concerning a controversy resulting from the short-lived decision that year to ban women from taking part in the Tinsley Green championship.

The Oxford English Dictionary is sure tolley isn’t a local term but a corruption of taw-alley, a version of the slightly more common alley-taw. Both halves of that refer to a marble. A taw (origin unknown) is a large or choice marble that’s usually made of glass these days, though once, of course, it would have been carved from marble. Alley is said to be a corruption of alabaster, meaning a “real” marble as opposed to cheaper ones moulded from clay or terracotta.