This is a mainly British and Australian colloquial term for somebody small.

The original was Little Tich, a famous music hall performer whose real name was Harry Relph. He was born in 1867 with slightly webbed hands that had an extra finger on each. He stopped growing at age 10 and as an adult was only 4 ft 6 ins tall (about 1.4 m). As a child, he was nicknamed Tichborne because he was short and stoutly built, like Arthur Orton, the famous fraudulent claimant to the Tichborne inheritance. 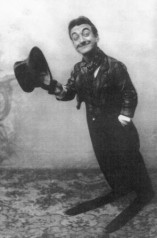 Little Tich became known as an eccentric dancer and a character comedian. At some point his name began to be given to other small people or to youngsters. The Oxford English Dictionary’s first example is from 1934, but I’ve turned up examples in books published in 1916 and 1917, plus a Punch cartoon caption of 1920, that suggest it was originally a First World War British army term (though there is some anecdotal evidence that it was in school use in the previous decade). The 1917 example is from All In It, by John Hay Beith (better known as the playwright and author Ian Hay):

It was weeks since any one (except Second Lieutenant M’Corquodale, newly joined, and addressed, for painfully obvious reasons, as “Tich”) had found himself at table in an apartment where it was possible to stand upright.

At some point — it’s hard to be sure when, though presumably long enough after Little Tich’s death in 1928 for the link to him to be broken — the spelling largely shifted to titch to match that of rhyming words like itch, pitch and stitch.

The word is also known in North American and Australia as a word meaning a small amount, not a little person, though my impression from correspondents is that it is now not so much used as it once was. Though this might seem to be from a regional pronunciation of ‘touch’, my few dictionaries that mention this sense say it also comes from Little Tich.