For us moderns, this word hides its light under a bushel, which is appropriate because bushel and strickle go together like a horse and carriage or fish and chips.

A bushel is an ancient volume measure for dry commodities, wheat in particular, equivalent to eight English gallons or about 36 litres. In the proverbial phrase the bushel is the container for measuring out the wheat, eminently suitable for a light to shyly hide under. A true bushel was level measure, not heaped. The container was filled to overflowing and a straight-edged piece of wood, the strickle, was used to push off the surplus corn that stood above its edges.

The Oxford English Dictionary traces it to Old English, though then it meant a pulley or a teat. It is very probably not the same word. Wooden tools of similar kind are recorded in English dialect under names such as strike, stroke, strick and stritch. Scots have straik in senses that match, such as straik measure for level measure; this seems to be from stroke. It’s more likely that strickle is from the action of striking off surplus material. However, the bushel container was also known as a strike, from the old Anglo-French term estrike, so strickle and its variations may instead be from that. 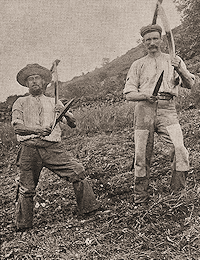 These two men are using strickles to sharpen their scythes during haymaking.

The otherwise incomprehensible English pub name Bushel and Strike comes from the measuring process, though it’s uncertain whether it refers to the container and its wooden tool or to two names for the container.

Strickles have turned up in all manner of trades, such as a tool in thatching or for trimming flax, a pattern or template in carpentry or a straight-edge for levelling sand in moulding. Another agricultural sense is linked to haymaking and harvesting. This description of it is from a historical novel set in the time of King Arthur:

It was hard work done with a short sickle that had to be sharpened constantly on a strickle: a wooden baton that was first dipped in pig’s grease, then coated with fine sand that put a keen edge on the sickle’s blade, though the edge never seemed sharp enough for me.