This is a modern weird word, used a few times after the late Arthur Koestler invented it in 1963, but now extremely rare. His aim, in an article he wrote in Encounter magazine in that year, was to describe pundits who prefer honest self-deception to ignoble truths.

It figuratively refers to individuals who hide their head in the sand. You may recall one animal that’s famous for its in-sand head-burying, at least in legend, so you won’t be surprised to learn that struthonian is from the Latin struthio, an ostrich. Related to it is the standard — albeit technical — English struthious, of or like an ostrich. 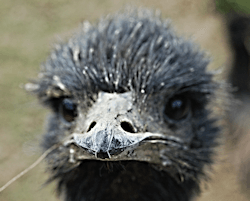 Who are you calling struthious?

An ancient, rare and defunct name for the bird, by the way, was struthiocamel, from Latin struthiocamelus. The Romans took it wrongly from Greek strouthokamelos, literally “sparrow camel” or, more loosely, “camel-bird” (the scientific name of the ostrich to this day is Struthio camelus).

Another Greek name for the ostrich was megas strouthos, big sparrow or big bird. In later Latin its name became avis struthio, the struthio bird. Incidentally, ostrich also ultimately comes from avis struthio, since the v changed later to a vowel and was further mangled in its passage through Old French (much the same thing happened with French oiseau, bird, also from avis via the late Latin aucellus).

The only recent example of struthonian I can turn up is in the journal of the Royal United Services Institute dated July 2007: “Even if looking into the future can be demonstrated usually to be futile, you still need to practise; you might get better, and one day you strike lucky and you hit a tipping point. As the wisdom of snooker players informs us: ‘The more I practise, the luckier I become’. Being struthonian is not an option.”