In brief, the spissitude of a material is its density, thickness or compactness.

In January 1924 the Atlanta Constitution reported that spissitude had been added to others, such as thermometer and truly rural, as words the New York police used to test the sobriety of midnight revellers. 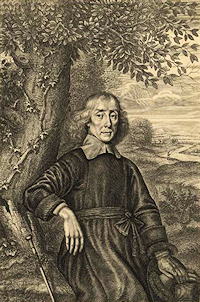 Dr Henry More, a specialist user
of spissitude, in a portrait by
William Faithorne

What the word meant was irrelevant, even if any midnight reveller knew it or was in a fit state to define it. It was enough that it contained those hissing sibilants that make it sound like a curse. In fact, it’s respectably scholastic and technical, though hardly common.

It is to the molasses chiefly, which gives a spissitude to the beer, that the frothing property must be ascribed.

A Treatise on Adulterations of Food, and Culinary Poisons, by Fredrick Accum, 1820. His book described the horrific compounds commonly added to food and eventually led to the first public health legislation.

It appears most often in books about the history of philosophy and spiritual thought that discuss the ideas of Dr Henry More. He was a seventeenth-century philosopher, for whom spissitude was a fourth dimension that allowed supernatural spirits to occupy a material place at will.

It has always been rare outside such specialist areas. This is a rare relatively recent appearance:

From the same tree he untied a length of rope and followed the line of wire, string, strips of sheet and chain into the trembling spissitude of the swampland, reeling in the line as he went.

Its source is the Latin inspissare (based on spissus, thick or dense), which is also the origin of the English verb inspissate, to thicken or congeal.