This archetypal American expression — meaning to run away, scram, leave in a hurry or escape — has led etymologists a pretty dance in trying to work out where it comes from.

What we do know for certain is that it suddenly appears at the beginning of the Civil War. Out of the blue, it became fashionable in 1862, with lots of examples appearing in American newspapers and books. The focus of all the early examples is the War; without doubt it started out as military slang with the meaning of fleeing the battlefield or retreating hurriedly. Its first appearance in print, in the New York Tribune of 10 August 1861, made this clear: “No sooner did the traitors discover their approach than they ‘skiddaddled’, (a phrase the Union boys up here apply to the good use the seceshers make of their legs in time of danger).” 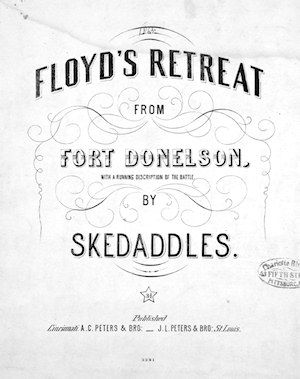 A satirical musical item from 1862 in which the pseudonymous author is using the newly fashionable slang term to point his message. The last lines of the lyric are “He who fights and runs away, / May live to run another day.”"

However, it quickly moved into civilian circles with the broader sense of leaving in a hurry. It crossed the Atlantic astonishingly quickly, being recorded in the Illustrated London News in 1862 and then being put in the mouth of a young lady character by Anthony Trollope in his novel The Last Chronicle of Barset in 1867: “ ‘Mamma, Major Grantly has — skedaddled.’ ‘Oh, Lily, what a word!’ ”

So far so good. Where it comes from is almost totally obscure. Was it Greek, as John Hotten argued in his Dictionary of Modern Slang in 1874, from skedannumi, to “retire tumultuously”, perhaps “set afloat by some Harvard professor”? It sounds plausible, but probably not. The English Dialect Dictionary, compiled at the end of the nineteenth century, argues that it’s from a Scottish or Northern English dialect word meaning to spill or scatter, in particular to spill milk. This may be from Scots skiddle, meaning to splash water about or spill. Jonathon Green, in the Cassell Dictionary of Slang, suggests this transferred to the US through “the image of blood and corpses being thus ‘spilled and scattered’ on the battlefield before the flight of a demoralised army”.