This bit of US slang for one dollar or money in general now sounds rather dated, though it still turns up from time to time, especially in humorous journalistic writing. One example:

Today I make a respectable mound of simoleons at my business job, but they pale, evaporate, and dribble down the side of the countertop when compared with the simoleons Mr. Grasso has accrued in his years of faithful service. 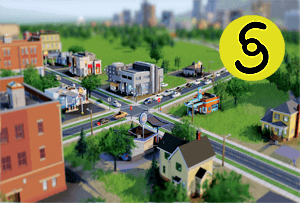 A scene from SimCity. Inset is the symbol for its currency, the simoleon.

The word was given a hig boost in public knowledge when it was chosen in 2000 as the name for the currency in the computer games featuring the Sims. However, I’d guess that few players realise the name was borrowed from nineteenth-century slang.

As to its origin, what follows is a bit speculative, but fits what evidence we have. In early eighteenth-century Britain, the small silver coin whose proper name was sixpence was often slangily called a simon. We’re not sure why, but a plausible origin lies in the name of Thomas Simon, a famous seventeenth-century engraver at the London Mint who designed some new coins after the Restoration in 1660, including the sixpence. A New Testament reference (Acts 10:06) to St Peter lodging with “one Simon a tanner” led to the sixpence later becoming known as a tanner instead, a colloquial description that survived until the sixpence was abolished at currency decimalisation in 1971.

Simon may have been taken to the USA and transferred to another coin. However, this assertion rests on just one known appearance of it as a slang term for money, in Harper’s Magazine in September 1858: “I was first in say, and bet a Simon”. Whether the term was ever common or not, it seems that some wit, familiar with the word’s slang sense and with the valuable French gold coins called Napoleons, bundled simon and Napoleon together and made from it simoleon.

The first example we know of is in a snippet of mock-biblical whimsy:

And thereupon he goeth down town, and the Nassau Street auctioneer scoopeth him in with a three-trade-shekel chromo and a genuine old master for seven simoleons.

Curiously, the second-oldest example on record is in the same style:

The doctor spoke unto Mr. Thede, and did offer to him many fat simoleons and talents of gold and shekels of goodly silver, and Mr. Thede hearkened unto his voice, and the tones thereof were too canny for him.