This delightful word from rural America, meaning something violent, extravagant, vigorous or a striking example of its kind, has become known everywhere that English is spoken:

Just when you thought that every imaginable etiquette question had been posed and answered, suddenly, from nowhere, just when you’re on holiday in the South of France and at least 1,000 miles from the nearest Debrett’s or glossy-mag advice page, a real rip-snorter leaps up and leaves you foundering, to wit: is it rude to stare at a disabled dog? 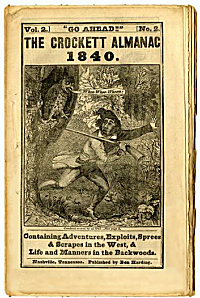 Its first appearance was attributed to Davy Crockett (“Of all the ripsnorters I ever tutched upon, thar never war one that could pull her boat alongside of Grace Peabody”). But as the word appeared in one of a series of almanacs bearing his name in 1840, four years after he died at the Alamo, we must take the link with a pinch of salt — as we must such other supposed coinages of his as circumflustercated and scentoriferous, part of the largely fictitious tall-talking vocabulary of mountain men that the almanacs almost single-handedly invented.

Snorter has had various senses that imply that something is an extreme or remarkable case of its kind. To take one example, around the time that ripsnorter appeared, snorter was applied to an especially ferocious storm, a sense that is alluded to in the slightly opaque example from the Crockett almanacs that I’ve quoted.

Rip may be a more-or-less meaningless intensifier, as it is in words like rip-roaring, though its sense of “rip” or “tear” may contribute energy and vigour. However, the storm sense of ripsnorter’s second element suggest rip might have another of its meanings, a stretch of broken water, as in rip tide and rip current.