At first glance, purdonium sounds like an exotic chemical element as yet unknown to science, a plot element in an SF story that might be a cousin of Wells’s cavorite. 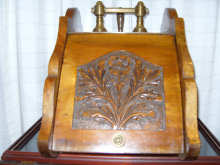 A purdonium. The front cover lifts up to reveal the inner metal container. Behind the brass handle, top back, is the handle of a coal shovel. [Picture courtesy of somewhereintime.co.uk].

Less exotically, it was a trade name for a type of coal-box or coal-scuttle that had a removable metal lining. This allowed the messy and noisy work of refilling it to take place away from the firesides of the nineteenth-century middle classes, while keeping the elegant wooden outer box in pristine condition.

When it came on to the market, in 1847, its name was greeted with derisive howls at what was thought to be yet another example of the extraordinary fashion of the time for mock classicisms (its critics assumed that the name derived from Greek pur, fire):

In consequence of the absurd mania for making use of Graeco-Latin compounds to describe inventions, it requires some knowledge of the ancient languages to understand even their names. But, perhaps, the difficulty increases in proportion to the correctness of one’s scholarship. ... The term “idrotobolic”, applied to hats, may boast of a more correct etymology, but what shall we say of “athicktobathron” for a carriage-step and “purdonium” for a coal-scuttle?

Hortensius: Or, The Advocate: An Historical Essay, by William Forsyth, 1849. The Idrotobolic hat, from Greek words that meant throwing off perspiration, was patented by the Queen’s hatters in 1847; it had ventilation valves to control the flow of air over the head. The carriage-step was correctly spelled Athiktobathron, which was fitted to a carriage called the Eumetableeton. The writer also noted Antigropolos, a trade name for a type of leather boot. A rare survivor of this fashion for mock-classical trade names is Aquascutum.

However, it is now understood that the true and only source of the name purdonium was a man named Purdon. Few details are known, but he was in some way associated with the London firm of Bell, Massey and Co who put the purdonium on the market.

The term survives in the technical vocabulary of some antique dealers and auctioneers. This is a rare excursion into literature:

On the hearth, behind the brass fender, stood a cheap Japanese screen in black and gold, the centre piece between a mock-mahogany coal purdonium on the one hand, and an occasional table on the other.