You do this, you really do. You just don’t know that you do. When you’re tired to the extent of yawning in fatigue, you may stretch your arms and neck to ease them. That’s pandiculation. Writers have been known to use the word just for yawning, but properly that’s an associated action, not the thing itself. This example might be correct, or might not, it’s hard to say:

Nothing new, nothing fact, nothing different. Result: ennui, followed by pandiculation and into the arms of Morpheus. 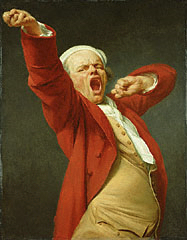 It comes, as you might guess, from Latin — from pandiculatus, the past participle of pandiculari, to stretch oneself. The ultimate origin is the verb pandere, to stretch. That verb has also given us expand, plus some other much rarer words.

Pandiculation isn’t encountered often. But variations on it were once used for a quack remedy:

“Pandiculate for Health! Grow Tall! Get Well! Be Young!” Exuberant ads like this, running in health-fad magazines since 1914, have proclaimed the virtues of a spine-stretching device called the “Pandiculator.” The Post Office last fortnight barred the promoter of this fraud from using the U.S. mail. A rectangular box about four feet long, worked on the principle of a medieval rack, the Pandiculator has T-shaped iron posts at each end, one fixed, the other movable on a cable pulley system. To pandiculate, all a gull had to do was lie down on the box, strap his head to the fixed post, his feet to the adjustable one; when he turned a wheel on the side, he could stretch his legs and hear the joints crack. The promotion copy claimed that this Procrustean bed would cure “every conceivable condition.”

Time, 20 Apr. 1942. Gull is in the sense of a person who is fooled or deceived, a slang term dating from the sixteenth century whose origin is unknown, but which is the source of gullibility and gullible.

This is an example of the advertisement: