The medieval physician Paracelsus described oppodeltoch, a word he seems to have conjured up from heaven knows where. One suggestion is that he derived it from bits of three other words: opopanax, bdellium, and aristolochia. All three names come from Greek. The first is a foetid gum-resin from the root of a plant resembling the parsnip whose name is from opos, juice, plus panax, all-healing; the second is a fragrant resin related to myrrh; the third means “well-born” and refers to a shrub that in Britain has sometimes been given the name common birthwort because it helped childbirth.

Paracelsus applied the word to a type of medicinal plaster and it appears in English with that sense until the seventeenth century. After that, it shifted dramatically, under the revised spelling of opodeldoc, to refer to various sorts of liniment based on soap dissolved in alcohol, with herbs and aromatic oils added.

A typical use was the one Mrs Beaton recommended in her Book of Household Management of 1861 for the treatment of a sprain: “The joint is to be rubbed twice a day with flannel dipped in opodeldoc, a flannel bandage rolled tightly round the joint, the pressure being greatest at the lowest part, and the patient allowed to walk about with the assistance of a crutch or stick.”

In the eighteenth and early nineteenth centuries a number of patent medicines incorporated the word, including Doranstorff’s Opodeldoc, Noakes’s Aethereal Anodyne Opodeldoc, Imperial Anodyne Opodeldoc, and Cajeput Opodeldoc, about the last of which the American Henry Hartshorne wrote in The Household Cyclopedia in 1881: “In several cases of lumbago and deep-seated rheumatic pains, it has been known to succeed in the almost immediate removal of the disease.” 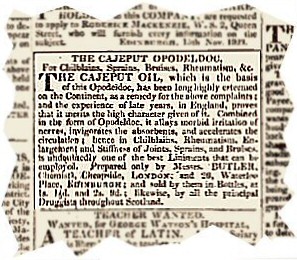 This advertisement for the Cajeput Opodeldoc appeared in the Edinburgh Advertiser in February 1823.

The most famous was Dr Steer’s Opodeldoc, made from Castile soap in alcohol, plus camphor, oils of marjoram and rosemary, and his special ingredient, ammonia. It was advertised in The Times of London in 1790: “The efficacy of this medicine in the Rheumatism, Lumbago, Bruises, Sprains, Cramps, &c. is universally acknowledged: it is equally serviceable in Numbness, Stiffness, and Weakness of the Joints, and in restoring a proper Circulation to the Limbs when in a Paralytic state. It is also excellent for Burns and Scalds, as well as for the Sting of venomous Insects.”

It goes on to remark that “It is the best embrocation for Horses that are wrung in the Withers.” Truly an all-purpose palliative.