If this word puzzles you, your response is appropriate. That’s what the word means — to puzzle, mystify, baffle or confound. It and its relatives are notable by their extreme rarity. A diligent search is required to find any instances of it.

Your broker is a real dipstick and slick as one too. You don’t need to have your brains metagrobolized by his inscrutable statements to know that something’s amiss.

A previous generation might well have found metagrobolise in this once-famous school story:

“It’s the olive branch,” was Stalky’s comment. “It’s the giddy white flag, by gum! Come to think of it, we have metagrobolized ’em.” 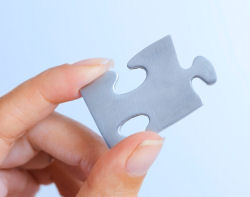 Some students of puzzles have adopted metagrobology to describe their pursuit, which makes them metagrobologists. Wikipedia says that the word was first applied to puzzlers in the early 1970s by Rick Irby, a well-known designer and constructor of wire puzzles. I haven’t been able to confirm this.

It’s originally French, invented in the form matagraboliser in 1534 by the humorist and satirist François Rabelais in one of his tales about the giant Gargantua. To create it, Rabelais turned to ancient Latin and Greek, finding the first part in a Greek word that meant vain or frivolous and the rest in cribulum, the Latin for a sieve, which arrived much changed in French via Arabic and Italian as grabeler, to sift (and later into English as garble, to sift the rubbish from spices, which later became our verb meaning to confuse or distort). By Rabelais’s time, grabeler had taken on a broader sense of examining something closely.

Peter Motteux introduced the English to the word metagrobolise in 1693 when he published his revised version of Sir Thomas Urquhart’s translation of the works of Rabelais: “I have been these eighteen days in metagrabolising this brave speech”. A footnote says that it was “a word forged at pleasure, which signifies the studying and writing of vain things”. However, one French edition suggested it was a burlesque word meaning “to give a lot of trouble for nothing, to bore and annoy others”.

How appropriate that it should confuse writers as to what it means.