Not to be confused with manacle or manicure, this is a much rarer word that also derives from Latin manus for a hand, in this case from the diminutive manicula, a little hand, which Romans also used for a plough-handle.

It has popped up through a discussion about it in a book on typography by Keith Houston, Shady Characters: The Secret Life of Punctuation, Symbols, and Other Typographical Marks (worth buying if you’re at all interested in the history of typography). A manicule is a hand with its first finger pointing, once used in the margins of manuscripts and books to draw the reader’s attention to passages of particular importance. 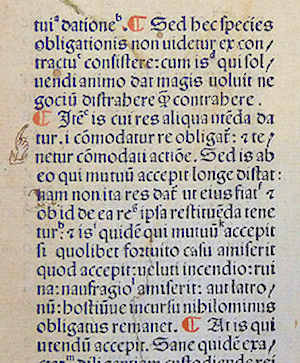 A hand-drawn manicule on a page from an early printed edition of Justinian’s Institutiones; dated 1485. (Photo: Penn Provenance Project.)

We often encounter it as a direction pointer in old-fashioned public signs, though these days we notice it most often as the vertical-pointing shape your computer’s cursor changes to when you pass it over a web link. Printers have given it a number of names, including fist and index. This last one is the official name, echoing the Latin word for a sign or pointer, as in index finger.

The history of manicule in English is a bit of a mystery. It isn’t recorded in the recent review of the letter M in the Oxford English Dictionary, nor is it in any other dictionary I’ve been able to consult. And I’ve found no example in print before 1996. However, William Sherman wrote in a detailed study of the sign in 2005 that he had been told it had become the standard term among scholars who study ancient manuscripts. I wonder if his informant actually had manicula in mind, either the Latin word or the identical Italian one; this has certainly been used in English-language works on manuscripts. Alteration of the final letter to turn it into an English equivalent seems to have happened very recently.