A newspaper article mentioned this word:

There’s that devil-horn thing metal fans do with their hands. Apparently, it is called the maloik. 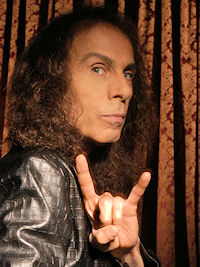 It’s the gesture you make with the index and little fingers while holding down the other two with the thumb. In the music world it indicates that the gesturer is rocking with enthusiasm and is encouraging others to join in. It’s associated particularly with the late Ronnie James Dio of Black Sabbath and other bands, who borrowed gesture and name from his Italian-born US immigrant grandmother.

It’s from Italian malocchio, the evil eye, a look from an individual which superstitious peoples in many cultures down the ages have believed could cause injury or bad luck for the person whom it’s directed at. The Italian word just means “bad eye” (mal occhio). Malocchio became shortened in the US in part because immigrants tended to be from the lower central or southern parts of Italy, in whose dialects the final vowels weren’t clearly enunciated. Contact with English resulted in the final sounds vanishing altogether; stress and pronunciation also often shifted. That’s why the street slang of Italian-Americans has kapeesh (“do you understand?”) instead of capisce and goombah (accomplice, gangster) instead of compare (close male friend, godfather). Through this process malocchio ended up as maloik:

“Oh, I’m okay, Gi-money. I just seem to have a lot on my mind today.” “That’s not like you. Whassa matta? Somebody give ya the maloik?” “Maybe this guy did!” He grabs Pitt playfully. “Did you give me the maloik, you son-of-a-gun?” Pitt tenses for a punch that doesn’t materialize.