Magiric is a fairly rare adjective that refers to cooking. Despite its form, it has nothing to do with magic, at least etymologically speaking, though as a non-cook I often feel the products of my wife’s kitchen must have been created by some such process.

The earliest and perhaps best known appearance, which is cited in the Oxford English Dictionary, is an overwrought and rhapsodising nineteenth-century work:

A magiric atmosphere enveloped the capital of the universe with its delicious fragrance, and the joyous free livers of Italy cultivated in their gardens plums of the most beautiful purple and gold, far superior to the much-extolled fruit from Damascus and Memphis.

The Pantropheon: or History of Food and its Preparation, by Alexis Soyer, 1853. 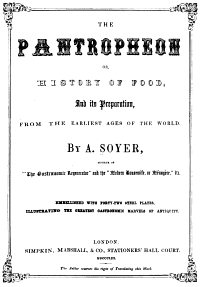 The word derives from the classical Greek mageiros, cook or butcher. Also from it are several other usefully obscure terms that include mageirics, the art of cooking, magirological, skilled in cookery, and magirologist, which the OED points out is equivalent in meaning to magirist, an expert in the art of cooking. Also known is mageirocophobia, a fear of cooking, a common affliction.

Perhaps the rarest of all the derived words is magirology. There’s no doubt that it’s a word written about rather than used, as it turns up almost exclusively in books such as Word Nerd and The Endangered English Dictionary. I can find no example other than the one work cited in the OED:

From the very first appearance of magirology in Greece, it produced effects absolutely magical.

The School for Good Living, an anonymous work subtitled “A literary and historical essay on the European kitchen: beginning with Cadmus the cook and king and concluding with the union of cookery and chymistry”, 1814.

Should you want to say any of these, the g is soft, as in magic.