When one reads Umberto Eco one must be prepared for exotic words. This one appears in the English translation by William Weaver of Eco’s The Island of the Day Before:

Perhaps he would have done the same if he had taken up creating scenes for the theater: do not playwrights derive improbable and clever events from passages of probable but insipid things, so that they may be satisfied with unexpected hircocervi of action? 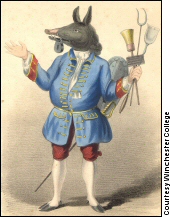 The Hircocervus or
Trusty Servant

A hercocervus is a fabulous beast, half goat, half stag. The idea of the goat-stag goes back at least to Plato, who used it as an example of a thing that was knowable even though it didn’t exist. Its first appearance in English is in a manuscript of 1398 now in the Bodleian Library in Oxford. In origin it is just the Latin word for a billy goat (hircus) attached to that for a stag (cervus). (The more usual Latin for a male goat is caper and for a female capra, as in the astrological sign Capricorn; hircus appears only in some rare words such as hircose, goat-like, and in the formal scientific name for the common goat, Capra hircus.)

The fabulous animal has not, however, always had a simple form of a goat and a stag. In a book by Arthur Cleveland Coxe, Impressions of England, published in 1856, he wrote about a famous painting at Winchester College:

I must not omit to mention the time-honoured Hircocervus, or picture of the ‘trusty servant,’ which hangs near the kitchen, and which emblematically sets forth those virtues in domestics, of which we Americans know nothing. It is a figure, part man, part porker, part deer, and part donkey; with a padlock on his mouth, and various other symbols in his hands and about his person, the whole signifying a most valuable character.

The views of the college menials on this characterisation are not recorded.