It’s a German word — literally holy light — for an aureole or circle of light around an object. Applied to people it’s a halo. 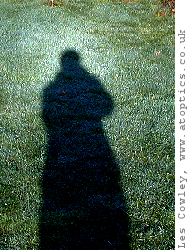 This example of heiligenschein
was taken by Les Cowley in his garden one wintry morning.

The word has been borrowed in a particular and specialist sense for a sheen that, if you’re very lucky, you may see around the shadow of your head. The sun must be low in the sky and your shadow must be cast on grass that’s damp with dew, so you have to be an early bird to stand much chance of seeing it.

It’s caused by internal reflection within the drops of water on the blades of grass (a related process in other circumstances makes a rainbow). The rays of the sun are reflected most strongly at or near the point that’s exactly opposite the sun. As your head’s in the way at that point, the brightness is visible around the edges of its shadow. You can see it best if you move your head a little, because the increased brightness moves with you. Only you can see it; other people with you will each have one of their own which, likewise, you can’t see.

The word first appears in this sense in 1834, in a German book with the title Abhandlung über den Heiligenschein, in which Dr Caspar Garthe wrote about the phenomenon. When writers in English followed it up, they naturally borrowed his name for it.

This is a rare appearance outside books on optics:

With the sun behind him, the shadows were flattened, or disappeared altogether, as if he was looking down at the bleached floor of some dead ocean. In fact, when the sun was right behind him, the lunar landscape seemed to brighten suddenly. Heiligenschein, the lunar scientists called it. The saint’s halo: some obscure effect of the dust.

Moonseed, by Stephen Baxter, 1998. The effect here, a real one noticed by astronauts, is caused by glassy volcanic beads within the lunar dust.

A related optical effect, but like a circular rainbow, is called a glory. You can sometimes spot it if you’re looking out of a plane’s window at its shadow cast on a cloud. Natural phenomena like the famous Spectre of the Brocken, an extended shadow of a person cast on fog or cloud from a high place when the sun is low in the sky, often have a glory around the person’s head.