To describe some attempt at communication as gibberish today is most likely to disparage it as mere meaningless verbiage. But at its strongest, in its earlier days, gibberish was speech that belonged to no known language. It was worse even than calling it double Dutch or asserting that it was all Greek.

Etymologists have been scratching their heads over its origin almost since it first appeared in the language in the middle 1500s. There’s a set of similar words — gibber, jibber, jabber, gobble and gab (as in gift of the gab) — that may be related attempts at imitating incomprehensible utterances. But how they arrived and in what order is unknown. An eighteenth-century writer linked gibberish with the French word geber, meaning to cheat, which is now not thought to be in the least likely. Other experts prefer an origin in an unrecorded Germanic word. 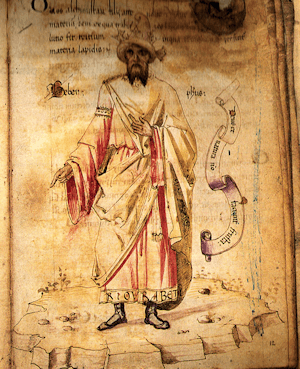 The alchemist Jabir ibn Hayyan, from a 15th century European portrait of “Geber”.

The best of the invented stories about its origin is the one that Dr Samuel Johnson subscribed to in his Dictionary of 1755: “[I]t is probably derived from the chymical cant, and originally implied the jargon of Geber and his tribe.” Geber is a Latinised form of the name of a prolific eighth-century Arabic writer, Abu Musa Jabir ibn Hayyan. His name is attached to hundreds of books, covering such an encyclopaedic range that some scholars have argued he was the pseudonym of a syndicate or was awarded authorship by posterity.

One work attributed to him is The Book of Stones According to the Opinion of Balinas. This says: “And, as always, we deliberately abrogate in one book what we say in another. The reason is to baffle and lead into error everyone except those whom God loves and provides for.” He seems to have succeeded splendidly in this aim, for the work — like most of the writings attributed to him — is hard to understand, full of mystical musings and technical terms that can’t easily be translated. Hence, the story goes, gebberish or gibberish. There is, you will appreciate, no truth in this.

One notable point about gibberish is that it has shifted pronunciation. Today, it’s almost always said like jibberish, with a soft g sound. But at one time, it had a hard g; some current dictionaries give that as a variant pronunciation though it survives only to a small extent — a British survey in 1998 found the hard g form was used by only 4% of respondents. That version may suggest a closer connection with gobble and gab and a lesser one with jibber and jabber.