A gazebo is a small building, usually in a garden, with a good view.

This word is surrounded by more mystery than an earnest etymologist would like. It appears in 1752 without any warning or antecedent in part four of a book by William and John Halfpenny with the title New Designs for Chinese Temples, an influential work that was aimed at the then new English fashion for the oriental in design and architecture. 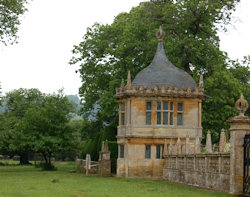 An ornate gazebo in the gardens of Montacute House, Somerset

Little is known about William Halfpenny, who called himself an architect and carpenter, not even if this was his real name (another architectural writer of the period, Batty Langley, said he was actually called Michael Hoare), nor whether his collaborator John Halfpenny was his son, as some have assumed, or even existed.

The word gazebo is equally mysterious. A lot of people have assumed that — like the temples described in the book — it must be of oriental origin. If it is, nobody has found its source. Failing that, etymologists make an educated guess that he named the structure tongue-in-cheek, taking the ending -ebo from the Latin future tense and adding it to gaze, so making a hybrid word that might mean “I will look”. If true, the model was probably videbo, “I shall see”, or perhaps lavabo, literally “I will wash”, taken from the Latin mass of the Roman Catholic Church to refer to the towel or basin used in the ritual washing of the celebrant’s hands.

Early gazebos were often a tower on the roof of a house, a projecting balcony, or a structure attached to the top of a wall. Only much later was the word applied to a summerhouse, usually one with open sides. To be strict about it, only those edifices with a good view may be given that name; all others are mere shelters.