This is a one-time British army slang term meaning that all is in order or everything’s OK. It’s a memorial to one of the most famous soldiers of the latter nineteenth century, Sir Garnet Wolseley, later Viscount Wolseley. 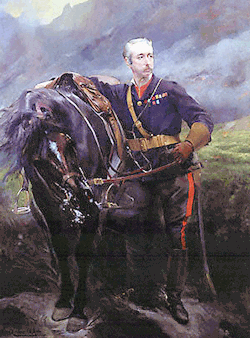 Sir Garnet had a long and successful military career, fighting in the Crimean War and the Indian Mutiny and leading many successful military campaigns in the 1870s in Canada, the Gold Coast, southern Africa, Egypt and the Sudan. He was hailed as the master of the small war, did much to reform the army and was caricatured in 1879 by W S Gilbert in The Pirates of Penzance as the very model of a modern major-general.

This modern summation by the author of a famous series of historical novels gives the essence of the man:

He won no distinction as a commander in a great war, but his record in the so-called “little wars” — indeed, the variety and success of his service generally — is probably unique in the history of arms. An Anglo-Irishman, he followed his own maxim that if a young officer wants to do well he should try to get himself killed; Wolseley tried really hard. ... Flashman shows him briefly as a young staff-officer, before the full flowering of the quick temper and impatient efficiency which were to make the expression “All Sir Garnet” synonymous with the modern “Right on!” Wolseley always wanted the best; typically, he chose for one campaign a man who had beaten him in competition.

The introduction to Flashman and the Dragon by George Macdonald Fraser, 1986.

He championed the private soldier and his men were fond of him. The view grew up that if Sir Garnet was in charge everything would go well, leading to the catchphrase.

“They’re comin’ along,” he cried to Mackenzie, as the thud of galloping horses was heard in the rear. “If I can only do the Horatius on the bridge business till they gits ’ere, we shall be all Sir Garnet.”

They were said to use the expression so much that it became slurred out of all recognition into all Sigarneo or all Sigarno, though they’re rarely recorded. In later years it moved from the army into the wider Cockney vocabulary:

“What ever are you doing, Cook?” said Nurse. “That’s all right, lovey. That’s All Sir Garnet, and don’t you make no mistake. Don’t you — make no mistake.” Here Mrs. Frith gave a very loud hiccup and waved her arms and did not even say ‘beg pardon’ for the offensive noise.

Military men and Londoners during the First World War would have been surprised to read in the American publication The Living Age in 1916 that “The phrase is obsolete, and would probably surprise modern readers.” The written record certainly doesn’t support that transatlantic view and indeed there are older people today who still remember it.