If you should find yourself one day in the cloisters of a cathedral or monastery, at least in Britain, you need not be lost for a word to identify the open courtyard it encloses: it’s a garth. 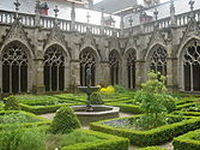 Strictly speaking, it’s a contraction, of cloister-garth. There were once many such compounds, such as apple-garth (an orchard), fish-garth (an enclosure on a river or seashore for trapping or storing fish), church-garth (a churchyard), vine-garth (a vineyard), willow-garth (a field where willows or osiers are grown), stack-garth (a rick-yard, an enclosed space for storing stacks of hay, straw and other produce), and fold-garth (a farmyard). You can work out cabbage-garth for yourself.

As you will have gathered, garth was once a very broad term. It could mean almost any patch of enclosed ground used for a specific purpose, such as a yard, garden, field or paddock. It appeared in the northern parts of Britain in the fourteenth century and derives from Old Norse garðr, a yard or courtyard. Through Old English it’s related to yard in similar senses, and also to garden.

Garth is now rare except in place names, in historical or poetical writing, or in some northern English dialects. The personal name comes from the same source, as it originally referred to somebody who lived near an enclosure, especially a paddock or orchard.