The British humorist Miles Kington died on 30 January 2008. While working for Punch magazine in the 1970s, he wrote a regular weekly column, Let’s Parler Franglais!, short pieces pretending to be a course in basic French (“Teach yourself dans dix minutes. C’est un walk-over.”); these were published as a series of books from 1979 on. (He also produced a Latin Tourist Phrase Book that included such gems of mistranslation as ad hoc, wine not included, and ex cathedra, ruined church.) 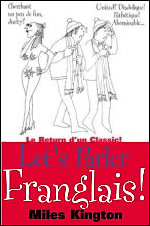 Though his is the name most closely associated with Franglais in the UK, he didn’t invent it. It was created in French in 1959 as a blend of Français and Anglais. It referred to the dilution of the purity of the French language through the uncontrolled introduction of such Americanisms (or what were considered to be Americanisms — we British were excused) as le weekend, le melting-pot, le snack-bar and le striptease. It first appeared in Parlez-vous Franglais, by Professor René Étiemble, then professor of comparative languages at the Sorbonne. “The French language is a treasure,” he wrote. “To violate it is a crime.”

In English, under the influence of writers such as Miles Kington, Franglais came instead to mean the macaronic mangling of the languages for humorous purposes. However, the genre, if we can dignify it by that name, goes back a lot further. Surtees had fun with it in Jorrock’s Jaunts and Jollities (1838): “‘Oui, Monsieur, cinq fois,’ repeated the Countess, telling the number off on her fingers — ‘Café at nine of the matin, déjeuner à la fourchette at onze o’clock, diner at cinq heure, café at six hour, and souper at neuf hour.’”