Paul McCann asked about this word. He had found a reference to green ferret in Charles Dickens’s Bleak House; it was one of a long list of items retailed by the legal stationer Mr Snagsby, together with “office-quills, pens, ink, India-rubber, pounce, pins, pencils, sealing-wax, and wafers ... pocket-books, almanacs, diaries, and law lists; string boxes, rulers, inkstands glass and leaden pen-knives, scissors, bodkins, and other small office-cutlery”.

The second word has nothing to do with the animal. It’s a modified form of Italian fioretti, floss-silk, which consisted of untwisted filaments of silk shed from silk cocoons during spinning. 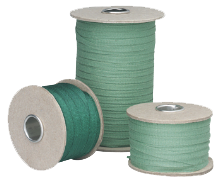 Lawyers used a green-dyed version, hence green ferret. In Dickens’s time, it was as much a symbol of the legal profession as red tape; the two were often mentioned together, though its purpose seems not always to have been clear to non-specialists. Frances Collins said of it in 1879:

I was accustomed to keep it in my desk for tying up little parcels nicely for the post; but, alas, like many other old-fashioned things, it has degenerated, for the last time I asked for it at a stationer’s shop a common-looking, loosely made, cottony green tape was offered to me, instead of the strong, closely made ribbon of former times. So I content myself with red tape, and green ferret has dropped out of my little list of necessaries.

George Augustus Sala wrote in London Up to Date in 1893 of a lawyer that “he has a bundle of papers in his hand, tied up with green ferret. The papers are dog-eared and yellow with age.”

However, a correspondent to Notes and Queries in 1861 had said firmly, “The only purpose for which green ferret is used is one to which, as old deeds show, red tape was formerly applied, namely, the attaching of seals to deeds engrossed on parchment”.

Green ferret has never gone out of use, though the old name has quite vanished because it has long since ceased to be made of silk and is woven from cotton. These days, it is sometimes prosaically called green tape alongside the more evocative term grass tape.