I was consulting an old book when the Empress Poppaea’s name came up. You surely remember her: second wife of the Emperor Nero in ancient Rome, notorious for her intrigues, and commemorated in the clerihew:

The Empress Poppaea
Was really rather a dear;
Only no one could stop her
From being improper.

The context was her skincare routine, which was like nothing seen in Rome before. It wasn’t just the daily baths in asses’ milk, but also the then newfangled overnight face packs of damp barley meal, followed by the daytime application of chalk and white lead.

The book introduced me to fard, to paint the face, and to the noun fard, a cosmetic.

I think, that your sex make use of fard and vermillion for very different purposes; namely, to help a bad or faded complexion, to heighten the graces, or conceal the defects of nature, as well as the ravages of time.

Travels Through France and Italy, by Tobias Smollett, 1766. 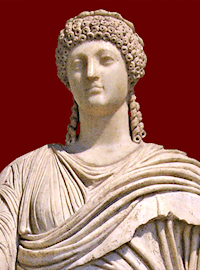 English borrowed fard from French in the sixteenth century but abandoned it again in the nineteenth. Though fard would be a usefully brief alternative to “put on one’s makeup”, the chances of hearing comments like “I farded in the train on the way to work” are rather small.

If you know French, you may have guessed what this word means, since it’s still in that language in the sense of cosmetics or makeup (and it does have a verb meaning to put on makeup: farder). Nobody knows for sure where the French word came from: one suggestion is the Old High German farwjan, to colour, ancestor of the modern German verb färben. In its early years in French fard could figuratively suggest a misleading appearance or language, which survives in the idioms parler sans fard, to speak candidly or openly, and vérité sans fard, the plain or unvarnished truth.

Fard in English often specifically meant a white face paint (hence Smollett’s “fard and vermillion”, contrasting white and red). It was either the ancient unguent of lard mixed with white lead or a similar concoction based on a brilliant white compound of bismuth, sometimes called blanc de fard. Both were poisonous and long-term use damaged the skin.

The word occasionally appears as a deliberate archaism:

A trio of women holding hands, gaunt and thin as the inmates of a spitalhouse and attired the three alike in the same cheap finery, their faces daubed in fard and pale as death.

Cities of The Plain, by Cormac McCarthy, 1998. A spitalhouse, where spital is a shortening of hospital, is a place set aside for the diseased or destitute, usually of a lower class than a hospital.