A fandangle may be a useless or purely ornamental thing. It may also refer to something nonsensical, foolish or silly:

A big white wedding is a huge fandangle for not much return. The guests carp about their placement; the vicar, it turns out, would rather be at a funeral; and the happy couple are either rigid with stress or flaccid with drink.

One of my dictionaries describes it as archaic, but nobody seems to have told its users, who continue to find it the right word for any situation that implies confusion or fatuousness. This is from a New Zealand book review: “There’s a sense of déjà vu about so much of the plot. And the whole fandangle could have been at least 100 pages shorter.” And this from the US: “Feuding politicians in Washington continue their endless fandangle on possible changes to the evermore complicated federal tax code.” It seems still to be known, to some small extent, almost everywhere English is spoken. 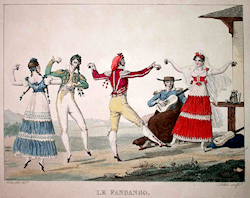 A nineteenth-century French engraving
of the fandango

A plausible suggestion for its origin is the Spanish dance called the fandango, known from the eighteenth century but whose name in English by the early nineteenth century had taken on the same senses of foolish nonsense or useless ornament that were later transferred to fandangle. Was this a Puritan reaction to the dance, perhaps?

This oblique example suggests that fandangle was in use rather earlier in the nineteenth century than the reference books usually say:

It seems that there is one James Daly, of the county of Galway, and he wants to be called Lord Fandangle, or Dumsprandle, or something of that sort, and the king was afraid to go through the operation of conferring the royal nick-name! What a pity: what a shocking disaster, that the Connemara men could not call sweet James Daly by the name of Lord Fandangle! (Great laughter.)

The Standard (London), 6 Jun. 1829. James Daly was the MP for Galway Borough and Galway County for some 25 years; in 1845 he was made a peer as Baron Dunsandle and Clanconal; to a person unversed in Irish place names these must have been only a little less nonsensical than Fandangle or Dumsprandle. He had clearly been angling for the honour for many years.