Fear not, this isn’t a risqué word. Cockshut time is the twilight of evening. The word has a longish history, with this being the first use on record:

Thomas the Earl of Surrey and himself,
Much about cock-shut time, from troop to troop
Went through the army, cheering up the soldiers.

There are two ideas about where it comes from. One suggests that it refers to the time of day when fowls are shut up in their coops for the night, though why it should be cock rather than chicken or some other word isn’t explained. A link with cockcrow for dawn has been suggested, though the two terms aren’t parallel and the connection feels stretched. 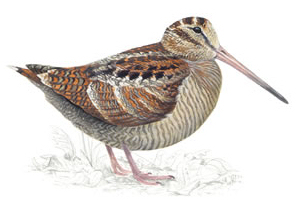 Other writers point to the variant form cock-shoot and to terms like cockshoot net. These are fowl hunting terms that are said to refer to the woodcock, a wading bird with short legs. It’s nocturnal, hiding during the day in dense cover but coming out at dusk, when it often flies low along paths and other openings in woodland. At one time, people used to trade on this habit to catch them in nets. This is the origin of several British place names, such as Cockshoot in Herefordshire, Cockshut Hill in Birmingham and Cockshoot Broad in Norfolk, as well as the family name.

However, in his English Dialect Dictionary a century ago, Joseph Wright included the hunting and twilight senses separately, hinting there may once have been two distinct words that became confused because they are linked to the same time of day. But it seems more likely that the woodcock origin is the true one.