Though we might define this word in general to refer to something having a changeable, varying lustre or colour, no two dictionaries entirely agree on its current apoplication.

Some mention only the bright lustre of a gem caused by reflections from within the stone, since the word now most often appears in discussions by gemologists; but other dictionaries mention the sheen of a bird’s plumage or the changing colours and texture of a material such as silk. 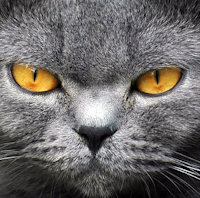 All agree, however, that the source of the concept is the gleam of a cat’s eyes in the dark. The source is the eighteenth-century French verb chatoyer, to shine like a cat’s eyes (based on chat, French for cat). Its French connections remain so strong that it is still sometimes said as though it were a French word (/ʃætwæjɑ̃/, roughly “cha-twai-yan”).

Many examples in English literature refer to shining eyes, as in The Insidious Dr Fu-Manchu, by Sax Rohmer, of 1913: “I managed to move sufficiently to see at the top, as I fired up the stairs, the yellow face of Dr. Fu-Manchu, to see the gleaming, chatoyant eyes, greenly terrible, as they sought to pierce the gloom.”