You might judge the age and geographical origin of a dictionary by looking up the definition of this word. Modern ones, especially those with an American focus, are likely to tell you it’s the name of a medium-hot chilli (though, being American, they will spell it chili, or sometimes chile). Older ones, especially British, will more commonly say it’s the knob on the back end of a muzzle-loading cannon. 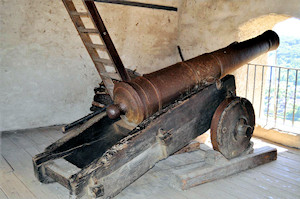 A cannon at Marksburg Castle on the Rhine, showing the cascabel at its breech end.Photo: © Michael Quinion

The source in both cases is the same, the Spanish cascabel, which means a little round bell, a child’s rattle, or a rattlesnake. Its origin is unknown, though it has been suggested it may be from the medieval Latin cascabellus, a little bell, or Latin scabellum, a kind of castanet played with the foot, which may be a diminutive of caccabus, a pot. The chilli was given its name by the Spanish in America because when dried the seeds inside rattle when it’s shaken. The Spanish also named the protrusion on the cannon, from its shape. (It’s there, by the way, so ropes or slings can be attached when the cannon is being moved.)

The most famous association of cascabel is with the Victoria Cross, the highest British honour for bravery. It has often been claimed that all the crosses ever awarded have been cast from the bronze cascabels of two cannon captured from the Russians during the Crimean War of the 1850s, though recent research has thrown doubt on this.