We associate the word blurb, a short description of a product written for promotional purposes, most closely with books, which is only fair, since it was invented for a meeting of the American Booksellers Association in 1907. The American illustrator and humorist Gelett Burgess had written Are You a Bromide in 1906, a work that introduced the world to bromidioms, hackneyed phrases (such as “I don’t know much about art, but I know what I like”) uttered by boring and predictable people whom he named bromides, after the then familiar sedative, potassium bromide. These days, the bromides are more frequently the commonplace statements rather than the people making them, but Burgess is credited with inventing the word. 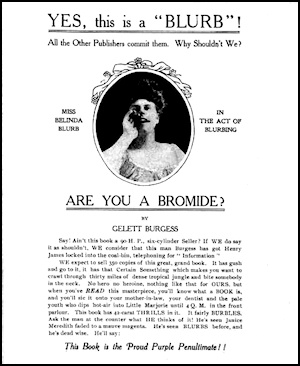 The original blurb of 1907, from the Printed Ephemera Collection of the Library of Congress.

For the meeting in 1907, his book, selling well, was presented to members of the Association attending their annual dinner. As was usual, a special bookplate was designed; in this case it featured a young woman named Belinda Blurb shouting the praises of his work in effusive language. The booksellers and publishers clearly found the word an excellent one for the puffing encomiums on the dustjackets of books and by about 1914 it had become the standard term for them.

Gelett Burgess invented more new words than anybody else at that period, which he incorporated into several books. An oofle is a person whose name you can’t remember; a voip is a type of food that lacks all gastronomic delight; a floogijab sounds like a compliment but has a sting in the tail; a tintiddle is an esprit de l’escalier, a witty comment you think of too late.

None of these gained any circulation whatsoever, but bromide and blurb have ensured his linguistic immortality, together with his most famous poem: “I never saw a purple cow/I never hope to see one/But I can tell you anyhow/I’d rather see than be one”. This was reproduced so often that he wrote a sequel: “Ah yes, I wrote ‘The Purple Cow’/I’m sorry now I wrote it/But I can tell you anyhow/I’ll kill you if you quote it!”