It’s not uncommon these days, even though the word is still widely used, to find it spelled bellweather or even bellwhether. For example — I do not shrink from naming the guilty — the Washington Times for 29 October 2006: “That’s why we should have used some bellweather event like the signing of the Iraqi constitution, or the parliamentary elections as our moment to declare victory and exit stage left.”

There’s some excuse for this, assuming a lack of prior knowledge and the absence of a dictionary, since the second part of the word is now rare in our urbanised existence. Wether is an old English word for a castrated ram. The experts think it comes from a prehistoric root meaning a year, perhaps because the ram concerned was a yearling; it’s a relative of veal, via the Latin vitulus, a calf. 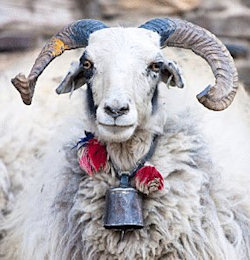 Bellwethers don’t usually look as pretty as this

The shepherd used a wether as the leader of the flock, whom the rest would follow. To be sure to know exactly where he was, a bell was hung around his neck. So: bellwether. By the fifteenth century, it was being applied to people, as a contemptuous term for a leader whom only sheep would follow, especially one who possessed a loud mouth but little judgement. That was still in use centuries later, as you may tell from Francis Grose’s Dictionary of the Vulgar Tongue of 1811, in which the word is defined as “[t]he chief or leader of a mob”.

In more modern times — within the past century or so — it has moved sense to refer to things, rather than people, that lead or indicate a trend, such as the way we are likely to vote in an election. A bellwether security is one that predicts the way the stock market is moving. To blindly follow trends as though we were sheep, of course, merely returns us to the old meaning.