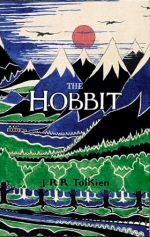 Many of us came across this word, meaning a spider, for the first and only time in the works of J R R Tolkien, and even perhaps suspected he had invented it. But his unfamiliar words were usually from ancient sources and attercop is a good example. Bilbo sang this in an episode in The Hobbit when he was distracting the spiders:

It’s still known — it appeared in the Yorkshire Post on 24 May in an article about Ian McMillan’s work to create a modern dictionary of the Yorkshire dialect. He described it as an old-fashioned word that was still spoken in North Yorkshire, which could also mean a peevish person or a moaner. Mr McMillan provided an illustrative sentence: “Tha’ won’t go in cos’ of an attercop? Tha’s an attercop thissen!”. [tha: you; thissen: yourself.]

The word is Old English, from attor, poison + cop, the head. (Cop, or coppa, was also used by itself to mean a spider, so cobweb ought really to be spelled copweb.) The name was given to spiders in the mistaken belief that they were all poisonous to humans. By the sixteenth century it had begun to be applied to a cross-grained, ill-natured, figuratively venomous person.