It came from outer space. 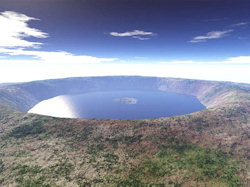 This lovely word refers to the remains of a large ancient meteoric impact, a roughly circular scar of crushed and deformed bedrock, from half a mile to 40 miles (0.8 to 64 km) in diameter. It’s only in the last half century that these remnants have been identified for what they are, since most have been almost completely eroded away. The best way to identify one is through the cone of shattered rock that lies beneath it. The most famous is probably the Sudbury Astrobleme in Canada, whose mines supply about half the world’s nickel.

Geologists may dispute my inclusion of astrobleme in the category of Weird Words, as it is a well-known term in geology, though it dates only from the 1960s. But I salute the person who invented it — showing a poetic streak not often associated with that most literally down-to-earth subject, it was coined from Greek astron, a star, plus blema, a wound.

Star wound — what a romantic notion. I shall never think of geologists as prosaic ever again.