Thursday saw the 50th anniversary of the successful launch of Earth’s first artificial satellite by the USSR on 4 October 1957. It was a sensation — many people who were around at the time will remember the astonishment with which it was greeted. 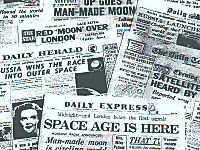 It also immediately introduced a new term into the language. Within two days, newspapers everywhere were referring to Sputnik, which first reports said was Russian for satellite or moon (looking back, it's interesting to see how many contemporary reports referred to Sputnik as a moon, a term that we reserve these days for a natural satellite). The Russian term actually meant a travelling companion, though some early reports translated it as “fellow-traveller”, probably with pejorative intent, since that phrase had a specific meaning of somebody who sympathised with the Communist movement without actually being a party member.

What Sputnik also did was introduce a lot of people to the -nik ending, which was reinforced later by the Russian and English term lunik for the rockets the USSR sent to the moon, which came from the Latin and Russian luna. One early result was a lot of short-lived and humorous formations. When the USSR sent up a second satellite on 3 November with the dog Laika on board, some American writers referred to it as Muttnik. The very public failure of the US Navy to launch a satellite on 6 December resulted in sarcastic terms like Kaputnik and Flopnik.

It also led to many figurative creations, mostly intended jokingly but a few of which have permanently entered the language. In 1958, the rise of the beat generation led to beatnik (folk enthusiasts briefly becoming folkniks) and to neatnik, a person excessively neat in his personal habits, the opposite of a scruffy beatnik. A robotnik was a person who blindly obeyed authority, the opposite of a refusenik, one sense of which in the 1980s was a person who refused to obey orders as a form of protest, although its main sense, from the 1970s onwards, was of a Jew in the Soviet Union who was refused permission to emigrate to Israel. A member of a pacifist movement was from the 1960s called a peacenik. In the late 1980s in the UK, noisenik came on the scene for a loud musician, especially one who played a form of rock music.

The -nik ending became so widely used that it is assumed by many people that Sputnik started it. But it’s a long-standing Slavic ending that implies an agent or a member of a class or group. As early as the end of the nineteenth century, a few Russian words ending in -nik became rather rare unnaturalised immigrants into English, such as chinovnik, a minor government functionary or a civil servant, and Narodnik, literally a member of the common people (Russian narod, people) but which in the late nineteenth century meant a member of a socialist political group among the Russian intelligentsia.

The ending is shared in particular with Yiddish and also appears in modern Hebrew, hence kibbutznik, a member of a kibbutz, a term that wasn’t much known in English at the time of Sputnik, though it had been recorded 10 years earlier. In American English, -nik has been an active word-forming agent from the early years of the twentieth century as a result of Yiddish influence. One result was alrightnik, an immigrant Jew who has raised himself from poverty to prosperity (though the main sense of the Yiddish olraytnik, borrowed from US English, was of an upstart, offensive boaster or parvenu who is philistine or smug). His opposite was the nogoodnik, recorded from 1936. Another still with us is nudnik, a nagging, pestering or irritating person, from Yiddish nudyen, to bore. The ending was kept in the public consciousness in the US through Al Capp’s frequent use of -nik words in his Li’l Abner cartoons.

So the entry of Sputnik into the language only reinforced a trend in American English, but one whose linguistic echoes are still with us and which we may celebrate along with the achievements of Soviet rocketry.