For several weeks, the staff of the British prime minister, Gordon Brown, has been talking up the possibility of an autumn election to provide him with a personal mandate after the resignation of Tony Blair in the summer (in Britain, when to call an election is the prerogative of the current PM) but then last weekend he decided not to go ahead. The good showing by the opposition Conservative Party in the opinion polls after their annual conference is said to have been a factor. This change of heart has produced great numbers of media comments that adversely mention Brown and bottle in the same sentence. 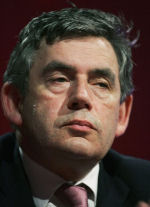 As some examples: the political editor of the Sunday newspaper The People reported last weekend, “Gordon Brown bottled out of a snap election last night.” The Times of India commented the same day: “In a sign Brown’s honeymoon may be well and truly over, the prime ministerial u-turn is being parodied by almost the entire British media as ‘Bottler Brown’, with the press having a field day about his indecisiveness and cynical manipulation.” The following day, a half dozen Conservative activists dressed up as bottles (Newcastle Brown ale, naturally) as a PR stunt outside Downing Street with the same slogan, Bottler Brown. A writer to the Daily Telegraph that day asked, “Since the Prime Minister has so dramatically ‘bottled it’, could Brown become a new bottle size, like magnum or jeroboam?”

The implications behind bottle were explained by Tony Park in The Plough Boy in 1965: “Spirits, guts, courage ... It’s the worst that could be said about you, that you’d lost your bottle.”

Though its origins are misty, we have some clues. No bottle was widely used from the middle of the nineteenth century to refer to something useless. Around the 1920s, we had no bottle and glass as rhyming slang meaning that a person lacked class, in the sense of being unimpressive or without style. This would seem to have been taken also to mean lacking in courage. Around this time the rhyming slang expression bottle and glass was used to mean arse (ass for US readers) and this seems to have been an influence that led to forms like Has your bottle fallen out? which may suggest that bottle in such forms figuratively means “guts” and that the sense came from an ability to control one’s bottle (arse) in the face of bowel-melting threats.

The earliest example of bottle that I know of appeared in 1958 in Frank Norman’s book Bang to Rights, an account of prison life. The verb, meaning to lose one’s nerve or chicken out, is first recorded at the end of the 1970s. Noun and verb, in various expressions, were popularised by a wave of demotic writing and gritty television programmes of the 1960s and 1970s, such as The Sweeney and Minder, that brought the slang of London to a wider audience. In the 1980s, copywriters working for the Milk Marketing Board popularised it further with a slogan for their product: It’s gotta lotta bottle (it has to be said with glottal stops to give it its full flavour). Interestingly, it was alluded to, as Notta Lotta Bottle, on a placard held by one of Monday’s bottle-garbed demonstrators outside Downing Street.

After its heyday 30 years ago, bottle, either as bottle out or lose your bottle, has not quite vanished from the British slang lexicon, though in recent decades it has tended to reside in that graveyard of outmoded expressions, the sports pages. So why the sudden and near-unanimous burst of usage at this moment? Step forward into the limelight Euro RSCG, a French-owned but global advertising agency that has just been appointed by the Conservative party. I’d guess a middle-aged account executive made the conceptual links Brown –> Brown ale –> bottle –> bottle out –> Bottler Brown (with a side memory of milk adverts) and went on from there.

And it worked splendidly.