This is the most recent addition to the 200-strong list of Oxford’s Very Short Introduction series. The author, Andrew Robinson, has written three previous works on writing, scripts and decipherment. 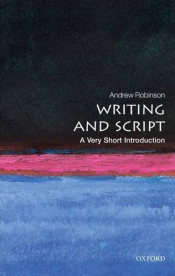 In 157 small pages, packed full of detailed information, we are taken at a trot through chapters on how writing emerged; the early forms of alphabetic, syllabic and pictographic scripts; a discussion of the competing views that writing was either invented once or was the creation of several language groups at different times; a treatment of scripts that have gone out of use and of scripts that remain wholly or partly undeciphered (such as the Linear A, Easter Island rongorongo, Etruscan and Zapotec ones). The illustrations, of which there are many, complement the text.

One chapter discusses whether the Western alphabet was created by Canaanite slaves in Sinai mines from the hieroglyphics of their Egyptian masters, as some scholars suggest. Wherever it came from, Mr Robinson takes us through its evolution via Phoenician traders, the Greeks, Etruscans and Romans into the modern world, along the way nicely explaining how the Etruscans ended up with three letters representing the letter k (k before a, c before e and i, and q before u), so explaining how it is that in English q is always natively followed by u.

His discussion of the Chinese and Japanese scripts, necessarily a brief one, is nonetheless clear. He goes on to explain the technical difficulties Chinese lexicographers have in constructing dictionaries in the absence of a neat A-Z classification system, being forced to fall back on a system that categorises symbols by shape.

He ends the book by pointing out that the complex Japanese scheme, and those of other writing systems that western writers in the past have considered unusably unwieldy, are not regarded by their users as inferior to alphabets. Writing systems, after all, are enmeshed within societies and cultures and are not solely a technical means of recording speech.