The Word at War

We are hearing so much about the centenary of the outbreak of the First World War that another sad date has largely passed us by, the 75th anniversary of the start of the Second World War on 3 September 1939. Philip Gooden and Peter Lewis have marked it by producing The Word at War, in which they discuss 100 words and phrases associated with the conflict— German, French, Italian and Japanese ones among them. 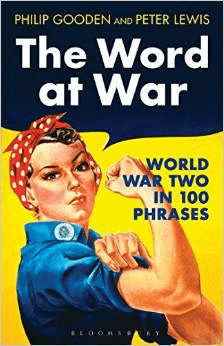 Many were created for concepts not previously known: Morrison shelter, victory garden, V-1, Baedeker raid, kamikaze, Woolton pie, Home Guard, Molotov cocktail. Others became associated with the war but had been coined earlier: concentration camp, fifth column. The Second World War was also the age of the acronym, not just the official ones — ASDIC, RADAR, PLUTO, LDV, SHAEF — but also the unofficial ones such as FUBAR and SNAFU and those in servicemen’s letters home: BURMA, NORWICH, SWALK, HOLLAND.

Among phrases intimately linked to the conflict are V for Victory, a date that will live in infamy and Kilroy was here. The authors include the story behind a recently resurrected one, Keep Calm and Carry On, from a poster which they claim was never distributed, despite two and a half million copies having been printed. Much of the value in this little book lies in the similarly extensive background details that Gooden and Lewis supply throughout.