Heavens, is this man prolific! David Crystal has written more than a hundred books, with no cessation in sight. And he has another out next week from another publisher (who hasn’t sent me a review copy, so I can’t speak about it). When you’ve written that many, overlap in subject matter and illustration is perhaps inevitable, so that a regular reader (this is the seventh book of his I’ve read in recent years) will recognise a retread of a lot of stuff he has previously come across. All the quotations, for example, are taken from his earlier work Words on Words. 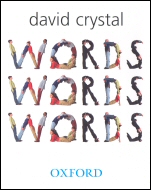 Professor Crystal’s book is a brief introduction to lexicology, the study of the form, meaning, and behaviour of words (as opposed to lexicography, which is about making dictionaries). In six parts and 33 short chapters, he covers a lot of ground, mostly at a smart trot. He discusses the size of our vocabularies, arguing (as he has in earlier works) that they are much larger than we think they are. He goes on to describe the way that we pick up language, the rise of the dictionary, where words come from, and the borrowings that form part of the modern English vocabulary. Other chapters focus on spelling, pronunciation, slang, affixes, compounding, dialect, the birth and death of words, the future of English, word games and wordplay. A final section is entitled “Becoming a word detective”, which is a collection of sources on etymology and other topics (in which World Wide Words is mentioned).

I’m not altogether sure about the audience he’s aiming at. My gut feeling is that he hasn’t quite got the level and tone right. It’s certainly not for children, despite a faint feeling that it could be repackaged as the Ladybird Book of Lexicology. But adults will find it a bit basic unless they’re real beginners. However, if you want an authoritative yet painless introduction — Lexicology for Dummies you might say — this is definitely the one.