From gene foundry to crowdsourcing, from memristor to copyleft, new words pour out of science and technology because they continually generate concepts that need descriptors. Jonathon Keats writes the Jargon Watch column for Wired Magazine and so is better placed than most to discuss our evolving technical language. In Virtual Words, he supplies 28 essays about a selection of these terms. 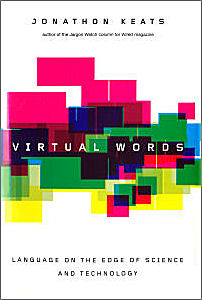 He begins with cell, one that is so fundamental to the study of the living world that few people stop to think about the image behind it. But its creator, or rather the person who first applied it to the concept — for the word was already in existence — was the seventeenth-century scientist Robert Hooke; examining a slice of cork under the microscope he saw a structure of tiny compartments that reminded him of the rooms of monks.

Modern scientists, sometimes to the surprise of non-specialists who shallowly stereotype them as dour seekers after truth, exhibit a delightful playfulness in coining new terms. Nowhere is this more clear than in the quantum world. Take, for example, the six quarks (a term borrowed from Finnegans Wake): up, down, top, bottom, charm and strange. Other members of this exotic particle zoo include such postulated particles as the gluon, which glues the quarks together, and the axion (named after a US brand of toilet cleaner, Mr Keats tells us, in the hope that it would clean up some of the mysteries of quantum, though the authorities say boringly that it’s really from axial).

Other essays focus on terms such as Anthropocene, steampunk, tweet, lifehacker and exopolitics. In each case the word is a springboard for giving the background and diving into linked concepts. The oddest essay title is (-///-) (catalogue that, librarians), which leads to a discussion of emoticons, of which his title is an example said to refer to blushing, as well as related typographic fun.

In a complicated chiasmus, he remarks, “The language of technology and science illuminates the science and technology of language.” That interconnectedness is well brought out in this book.