Treasure-House of the Language 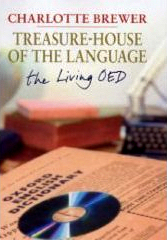 Of all the household gods - DIY manuals, home health manuals, the more all-encompassing cookbooks — to which we turn when in need of expertise, does any stand so high upon Olympus as “the dictionary”? That “unidentified authorising dictionary”, as the lexicographer Rosalind Moon terms it, is the book of words in which we tend to believe all is revealed. This generic dictionary has no name. Were it to take one, few would argue that it would be that of the Oxford English Dictionary (OED), that massive, multi-volumed linguistic vade mecum. It was thought up in the 1850s, set fully in motion 30 years later but only completed in 1928. A supplement followed in 1933, with four further intermediate supplements published between 1972 and 1986, leading to a second edition in 1989. Now, with all the advantages the Internet can offer, a third edition is emerging at the peak of its creation. Is there any book we trust more?

But should we? Sir James Murray, its first substantive editor, was no more truly omnipotent than any other old man with a long beard, and if his creation became a household god it was sired from human frailty. However authoritative the OED, it is a human work, one influenced by human considerations, and a close study makes this absolutely clear.

This is not a full history of the OED. That was essayed in 1977 by Murray’s granddaughter, and a replacement by Peter Gilliver of the OED will appear in perhaps a decade. Dr Charlotte Brewer, a fellow of Hertford College, Oxford, considers the dictionary that evolved after its first publication. She has analysed the personalities of both the lexicographers and their managers at Oxford University Press (OUP), the plans, the promises, the smart moves, and the blind alleyways. Drawing inter alia on the exhaustive research that appears on her own Web site, she has looked in great depth at such topics as the sources of the quotations that underpin the dictionary (why, for example, was the 18th century so badly represented?), the choice of literary authorities (where are the women?), the influence of personality (the conscious prejudices concerning the importance of certain language areas that underline Robert Burchfield’s 1989 edition), the simple selection of what was put in (not to mention what was left out, and not only on grounds of alleged “obscenity”), and the thorny world of financing.

Indeed, if Murray and his successors are among the creators of our household gods, then it is in this last factor, as represented by the seemingly endless (if highly civilised) clashes between the lexicographers and the publishers, that one might discover one’s Lucifer. Kenneth Sisam, one-time Secretary to the Delegates of the Oxford University Press (we might call him OUP’s managing director in a less academic environment), pops up like some demon king to ensure that the lexicographers remained underpaid; that delivery dates were maintained, even if copy was not yet properly ready; that, as the self-interested canard has it, managers must have the right to manage. All this is documented by Dr Brewer; she shows how Murray and his successors have been faced with this unnecessary burden. OUP is regularly proud to remark that the dictionary is a national glory. To its credit it (or rather the University) does finance it; the British government, to its shame, doesn’t. But why has the Press invariably found it so hard to treat its makers as part of that glory?

This is not a simple book. (For easy reading we may recommend Simon Winchester’s enjoyable but hardly dependable essays.) And while the writing is a model of clarity, the subject is highly specialist, requiring a basic degree of lexicographical knowledge. But as an exploration of a national treasure-house it is second to none. Like Linda Mugglestone’s equally revelatory Lost for Words: The Hidden History of the OED (2005) it takes us behind the scenes in a way that more readers than just dictionary-makers will find fascinating and hugely informative.