Next year will see Sarah Adams’s translation of the French writer Daniel Pennac’s Chagrin d’Ecole, a book of musings on life first as a dunce and, subsequently, a teacher of the intractably but not irremediably stupid. 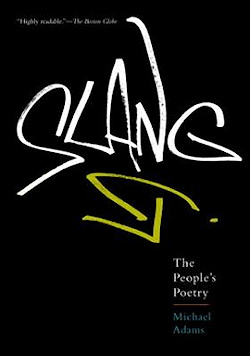 In it M Pennac is at pains to reassure his presumably cultured readers that one aspect of such dunces’ life, their use of slang, is nothing to be worried about. Slang is ephemeral, it is valueless, it is properly spurned by the orthodox lexicographer, it is not, mesdames et messieurs, even a language system. It is but a simulacrum of a secret code, created by those who have nothing worth hiding. Were I, who would deny every one of those suggestions, to offer M Pennac a book that at a stroke would overturn such illusions, and convince him that he speaks, as the French have it, through his cul, then it would be this one, by another Adams, Michael Adams, professor of English language and literature at Indiana University.

Adams has already made one foray into slang, a study of that manifested in the TV series Buffy the Vampire Slayer (Slayer Slang, OUP 2003). And although Buffy appears in these pages, this takes his analyses to another and, I would suggest, a superior level.

The last attempt to offer an accessible analysis of slang came in 1933: Eric Partridge’s Slang To-Day and Yesterday. And in it, suggests Adams, Partridge got “nearly everything wrong”, from his suggested etymology onwards. But as he adds, it was a different world, with different standards, and Partridge could only work with what he had. And to give Partridge credit, his was the only such study, outside the necessarily brief overviews offered in slang dictionaries.

Michael Adams is a teacher, a lexicographer and a linguist and all these inform his book. He looks successively at slang’s essential qualities, its social dynamics, its aesthetic dimensions and finally, and for me most fascinatingly (although as a lexicographer bereft of any linguistic skills, least penetrably) its cognitive aspects.

The big picture, as ever, is open to minute dissection, and I would suggest, knowing the nuts and bolts as I do, that he is perhaps too trusting of slang dictionaries as the potential source of theory. I would also argue against his prioritising of infixes to illustrate slang’s poetics and his respect for rhyming slang, and regret that by concentrating on contemporary material, he has no time for what to me has always been one of slang’s fundamentals: the persistence, if not of every word, then of its basic and recurring themes.

All this said, I have nothing but admiration for his efforts. This is a study that should please anyone who professes an intelligent interest in slang. It should perhaps be offered not merely to M Pennac, but to anyone, including its own publishers, who seem to believe that this complex and sophisticated area of our speech is composed only of rhyming slang and dirty words and as such is either risible or valueless.