The Sense of Style by Steven Pinker

Professor Pinker claims to love reading style guides. However, in much of his book — the last 115 pages especially — he points out their deficiencies and dismisses the views of purists, otherwise “sticklers, pedants, peevers, snobs, snoots, nit-pickers, traditionalists, language police, usage nannies, grammar Nazis and the Gotcha! Gang.” In this lies one of the themes of his work as well as a hint of his style.

He explains cogently how to write better, to learn the sense of style of his title. His arguments and examples are drawn from cognitive science, which tells us how people take in information, and from modern grammar, which has replaced traditional assertions about the nature of English with a researched understanding of the way English actually works. 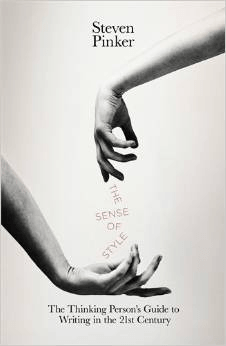 The book is entertaining while containing much good sense about the art of writing well. He takes examples of twenty-first-century prose and argues his way through what makes them good or bad. He advocates a classic style of writing, a conversation between writer and reader in which the writer knows what he wants to say and knows how much he needs to tell the reader and how much he can leave to the reader’s knowledge. The prime failure in much communication, he points out, is assuming that your reader knows too much (what’s called the curse of knowledge) or that he or she understands technical terms that are everyday concepts in the writer’s field but not outside it.

He follows this up with detailed advice on such matters as signposting your intentions to keep your reader on course, avoiding clichés, limiting the number of abstract nouns (to call that excessive nominalisation is an example of the problem), preferring positives to negatives (research has shown it takes more mental effect to understand negatives) and preferring active to passive (though he argues forcefully that the passive can usefully emphasise the key element of a sentence).

Much of the attention that’s been paid to The Sense of Style has focussed on Pinker’s iconoclastic views on grammar. Are dangling modifiers (the subject of so many Sic! items in this newsletter) always mistakes? No, he says, many are acceptable, so much so that we don’t notice them. It’s only the examples that lead to glaring incongruities that become reasons to avoid them. Is it OK to verb nouns? He says it often is, since they make it easy to express concepts that would otherwise require circumlocution and, anyway, using them is a matter of taste, not grammar. He points out the subtleties of less versus fewer, noting as one case that less is fine with units of measurement. In his discussion of punctuation, he advocates the serial comma, but decries the way his fellow Americans put their closing punctuation inside quotation marks, regardless of sense and logic.

After 115 pages of this and related rejection of convention, he ends “For all the vitriol brought out by matters of correct usage, they are the smallest part of good writing. They pale in importance behind coherence, classic style, and overcoming the curse of knowledge, to say nothing of standards of intellectual conscientiousness.” Amen to that.